Roxanne is well respected fighter with a 34 - 13 professional MMA career. Roxanne recently tried our tape and seems to truly enjoy it. We look forward to watching her continue to lead the way in the flyweight/bantamweight divisions and we are happy to supply her with as much tape as she needs to prepare for her next fight!

Modafferi's training began in taekwondo as a teenager in Pennsylvania, moving on to Mark Lawler's Kenpō Karate two years later. She then began attending the Dalton Judo Club in Pittsfield, Massachusetts. Her description of that experience was: "I thought I was all cool doing Karate, like the movie stars, but then in Judo I learned what it was like to fly." She trained for three years to gain a brown belt in the style, and then graduated from high school. Before leaving home to study at the University of Massachusetts Amherst, a fellow brown belt brought Modafferi to a Royce GracieBrazilian Jiu Jitsu association in Adams, Massachusetts, where she trained intensively for three months.

Modafferi majored in Japanese Language and Literature with a minor in Linguistics at the University of Massachusetts. While at college, she found the Amherst Athletic club, where New England Submission Fighting is based. In addition, she trained at another Royce Gracie association in Hartford, Connecticut, for about a year (necessitating a weekly two-hour round trip), also investigating Jeremy Libiszewski's School of Self-Defence in Wilbraham, Massachusetts. During summer vacations in Boston, she trained at Joao Amaral's New England BJJ club, now associated with Brazilian Top Team. Modafferi says, "Those guys are tough as concrete is hard, and beat my weaknesses out of me when they found them." To work on her striking, she also attended the Sityodtong Muay Thai Academy's North American branch in Somerville, Massachusetts, run by Kru Mark DellaGrotte. * 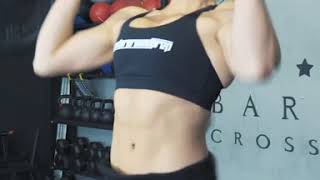 AI Tape to be Featured in Gainz Box

New Year’s Re|Solutions and You!

Did you Engineer that WarmUp?

Taking Care of Your Joints for Longevity

Texters Thumb, is that a thing now?